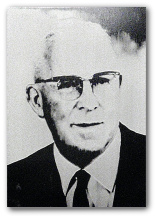 The year 1983 dealt a serious blow to the water bar of Colorado. Three of its most able members: Wayne N. Aspinall, Charles J. Beise and our father, A. (Arthur) Allen Brown, died within a few months of each other. Upon Dad’s retirement in 1983, these two friends praised his leadership in water resource development. He was proud to be their colleague.

In death Dad was eulogized as a “pioneer water attorney,” and an editorial observed: “His life serves as a tribute to what a single industrious, caring citizen can do to enhance the quality of life in his community.” Although known by his nieces as their “littlest uncle,” Dad had unique physical strength, a percep­tive intellect and a resilient spirit. He exemplified his Rotarian motto of “Service above self.”

Born in 1904, Dad grew up on a fruit ranch near Grand Junction, Colorado. His strength of character, affinity for hard work and sense of service resulted from several factors: a strong-willed, but loving mother, an understanding of the importance of land and water in­stilled by his father; the enduring influ­ence of his Sunday school teacher. Attorney Henry M, Tupper; the hard work on the farm and as a rural newspaper boy; and an innate self-disci­pline.

Dad’s youthful ambition to “be a lawyer like Mr. Tupper” was encouraged by his mother who insisted that none of her four sons would be “ditch diggers.” However, after graduation in 1922, education beyond high school seemed remote because the nearest college was far from home and he had no money. Fortunately, in 1925, Mesa Jun­ior College was established at Grand Junction. Dad was the first student to enroll in the new college because registration was held at the Mesa County Clerk’s office where he worked. Following graduation from Mesa College, he obtained a B.A. degree from the University of Colorado in 1929, and an LL.B. degree from the University of Southern California in 1931.

On July 13, 1931, Dad commenced the practice of law in Delta, Colorado, with Clyde H. Stewart, a former Delta County Judge. The Great Depression was in full swing, and Dad started work at a salary of $75 per month. (The firm’s sole secretary, receptionist, bookkeeper and paralegal, Zelah Snoddy, with fifteen years’ experience, earned $45 per month working nine hours per day, six days per week using a crank telephone and a manual typewriter and carbon paper.)

In 1935, Judge Stewart left the firm for two years to take a position in Presi­dent Roosevelt’s administration in Washington, D.C. Dad worked as a sole -practitioner during that period, but still found time to serve as Deputy District Attorney, president of the Young Men’s Civic League, a member of the Rotary Club and to indulge his passion for Republican politics.

He also pursued another passion ”Catherine Hunsicker,”the daughter of a prominent Presbyterian minister, James A. Hunsicker of Eckert, Colora­do, having first been attracted to her at the University of Colorado in 1929. In a letter to her shortly before their mar­riage. Dad recognized his workaholic habits, but explained that a lawyer in a rural area was expected to be skilled in all areas of the law, while a city lawyer had the luxury of specializing. He added that after six years he had been practicing law long enough so that “once in awhile I get the same question twice,” and he promised that he would moderate his work schedule. Unfortunately, the “Jealous Mistress” kept him from filling that promise.

Judge Stewart died in 1938, shortly after his son Rod had joined the firm. Rod and Dad practiced together as “Stewart and Brown” for twenty-two years before setting up separate firms. Dad was appointed Delta City Attorney in 1938, a position he held for thirty years. In 1940, Dad was elected District Attorney for the old Seventh Judicial District, which then included Mesa County.

The sheer size of the seven-county district made it difficult for one man to cover. While Dad made an effort to try all of the jury trials personally, he exercised the good judgment to hire the following attorneys as deputies: Jim Groves at Grand Junction (destined for the Colorado Supreme Court and the upper echelons of the Colorado and American Bar Associations); Don Stubbs at Montrose (later, a prominent Denver attorney who became a progressive president of the Colorado Bar Association); and Ed Dutcher at Gun­nison (who subsequently served as a highly respected district judge).

Having gained a reputation as an able and fair-minded prosecutor. Dad was re-elected in 1944. He enjoyed re­calling his trials with such formidable defense lawyers as Charles Moynihan and Charles Traylor in an age unen­lightened (and unencumbered) by the wisdom oi Miranda, Mapp and discovery rules. Throughout his eight years as District Attorney, Dad maintained an active private law practice and continued to serve as City Attorney for Delta and three other municipalities. He was also vice-president of the Colorado Bar Association in 1943 and president of the Colorado District Attorneys’ Association in 1945.

In 1948 his interests, turned from prosecution and political office to community affairs and municipal problems. In 1949, as president of the hospital board, he presided over the construction of a new hospital. In the same year he was president of the Rotary Club and recipient of the first Outstanding Community Service Award given by the Delta Chamber of Commerce. A year later, largely through his efforts as City Attorney and the work of several dedicated citizens, the city of Delta adopted the Council-Manager form of government

Representing several municipalities, water districts and a number of ditch and reservoir companies. Dad gained prominence as a tenacious advocate in water litigation and participated in sev­eral landmark water cases. Of one of his principal adversaries in this regard. Dad often remarked that had it not been for the litigious disposition of Cedaredge rancher Ð V. Hallenbeck, Sr., he might not have been able to send his children to college.

In the courtroom. Dad was an un­relenting champion for his client’s cause. He had little patience for those who strayed from the merits, and his temper could be gauged as the redness on the back of his neck rose like mer­cury in a thermometer. But he was also blessed with a perceptive sense of hu­mor which often calmed tense situa­tions and put matters into perspective. 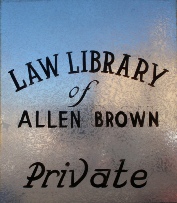 Once, he was opposing an ill-pre­pared attorney in an oral argument. Dad was seated at the counsel table lis­tening to his opponent’s interminable rebuttal and watching the weary, judge fidgeting. The Court Clerk who had left the courtroom when the rebuttal started some thirty minutes earlier, returned and in an audible whisper asked of Dad, “Isn’t he finished yet?”to which Dad replied in a stage whisper, “He was finished twenty minutes ago, but he doesn’t know it yet” The judge smiled, and the verbose colleague quickly brought his argument to an end.

Appointed as a director to the Colo­rado River Water Conservation District in 1956, Dad began his twen­ty-three-year tenure as its president in 1960. During that period, he was at the forefront of significant events in the de­velopment of water resources in Colo­rado. He fought to preserve Western Colorado water against transmountain diversions because he recognized the importance of water to the growth of the Western Slope. He worked closely with many others, led by Congressman Aspinall, to complete the Curecanti Storage Unit Dallas Creek, Ruedi and various other vital water projects.

In water matters his influence was far-reaching. He earned the respect of ranchers, governors, townspeople and legislators throughout Colorado and be­yond its borders for his pragmatic vision and insightful leadership. Upon his retirement from the River District, he received the Citizen’s Award, the highest honor the United States De­partment of Interior can give to one who is not a federal employee.

In recent years, we were fortunate to join Dad in the practice of law, a time which the three of us greatly enjoyed. Much more could be said of Dad, including his role as husband and father (and the pride he took in the ac­complishments of his daughter, Beth), the alumni awards he received from his alma maters, his directorships in busi­ness and banking, but perhaps his life is best summed up in the following words read at the memorial service commemorating his life: We remember him best as a man, whose quick humor made him a joy to be with and whose ready smile put you at ease. He was a man respected for his willingness to undertake diffi­cult tasks and who could be relied upon to see them through to the end. A man who. asked little of others and gave so much of himself. A man whose life was, and continues to be, worthy of emulation, a life for which we give thanks to God.

Raised in Texas, Terry obtained a B.A. from the...
Read More